Thank you to Stephen of Bohemian Traveler for passing on the proverbial blogging relay baton to me. I now join the Green Team train of travel bloggers, led by the folks at Overyonderlust.

Our task is to choose our three favourite travel memories and tag another travel blogger when we're done. The team with the longest running chain of bloggers will win a small prize from the Lowcost Travel blog, as well as major travel blog gloating status.

It is always a challenge to narrow down and pick favourites, but after a while looking back on travels, I realize the moments below are some of my happiest, craziest, and simply best moments on the road. 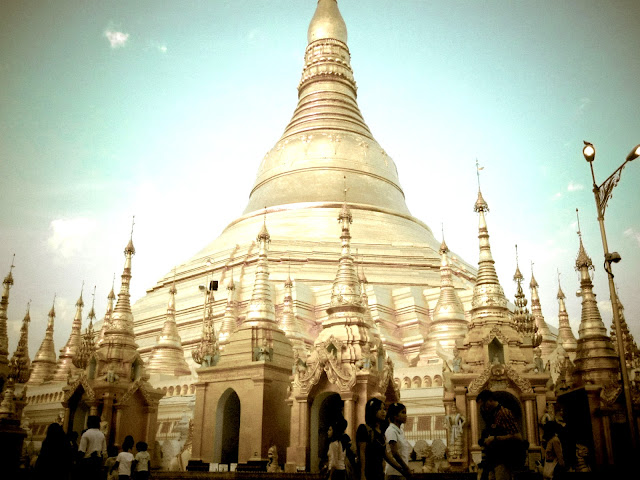 Walking up to Schwedagon Paya is the closest I've ever felt to heaven. In a land of curious smiles and cawing roosters, the paya glows bright like the sun. Once up close to the pagoda, I lost myself in the magnificence of it all. When a guard approached me and gestured to see my ticket, I was so in my own world of gratitude I couldn't even find mine. Worried I would be kicked out, I apologized frantically. Clearly not a problem, he pulled out a ticket from his pocket and pointed to the writing on the back of it. In English, I read to myself an explanation of the diamond-encrusted top of the pagoda. Squinting to the top, I couldn't see a diamond from a reflection of the sun, and the guard could see my struggle. He pointed to a particular spot on the tiled ground, stood on that spot, and then pointed up to the top. Following him, I stood in that precise spot, and I saw the sparkle of a blue diamond come into view. I'll never forget that kind guard, or the way that diamond sparkled all the way from the top of the pagoda.

2 - Having my ear ripped off by an elephant, Thailand

In keeping with the theme of Shaun's pink dolphin bite, I present to you my second travel memory: 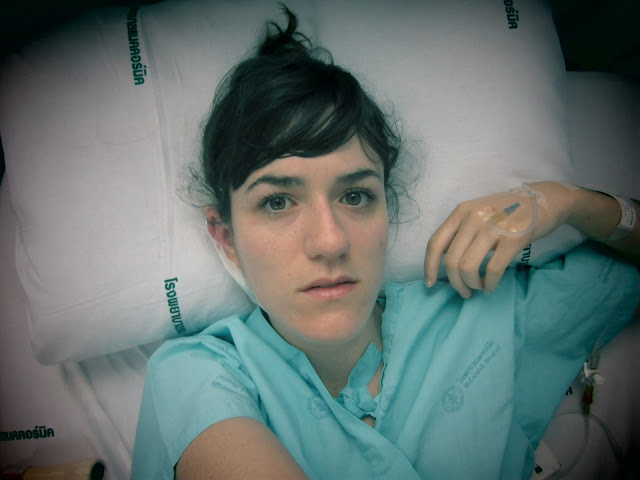 When you're at an elephant sanctuary in Chiang Mai, it's very easy to feel like fast friends with the elephants. Within minutes of arriving we were feeding the elephants sugar cane right into their mouths with our bare hands. In hindsight, it's obvious that I thought I had a little more of a bond with the elephants than they felt toward me. After an elephant reached out its trunk to check me out, I ended up on the ground with dirt and mud all over me, and a severed ear. Three countries and two rounds of stitches later, I still have my ear, and one helluva story for the grandkids.

To read the whole crazy story, you can read the blog post. 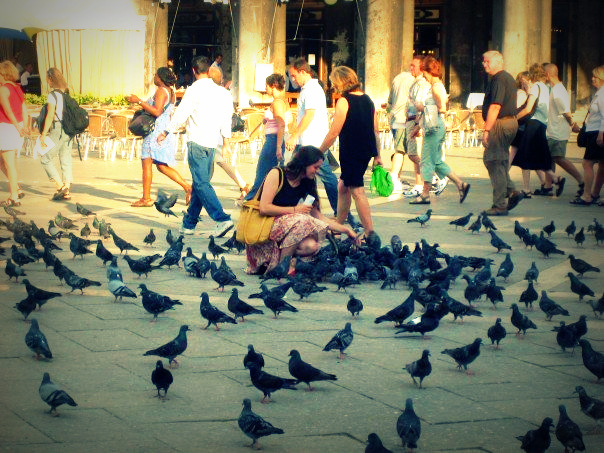 I love pigeons. People say they are dirty and diseased, but I find them charming. For a traveler, the sight of pigeons is familiar, and it can feel like a tiny taste of home when you're feeling miles away. Pigeons also don't discriminate between a rubbish bin or the statue of a saint - they will go anywhere. So when I was in Venice, and a man offered me a bag of birdseed for a Euro, I happily paid him. The pigeons flocked to me in a dusty, feathery flurry, and I maintain it was the best Euro I spent in all of Italy.

And there you have it, another successful post of travel memories for the Green Team! 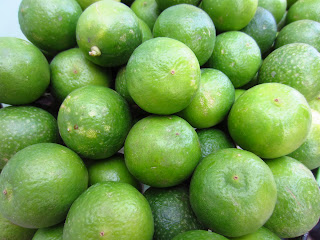 Team Green: As jam packed with surprise and zest as the green limes of Colombia!

I now tag my travel partner in crime ThisBatteredSuitcase to share her top three travel stories. I'm sure she'll give the Green Team something to be proud of.

Let the relay continue with every memory!
Posted by expatkerri at 1:36 AM 8 comments


After an amazing morning feeding sugarcane and bananas to elephants at Baan Chang Elephant Sanctuary, I was getting to feel like a bit of an elephant whisperer. If I could tell myself then that only minutes later I'd be dealing with an injury which would fester for the next 3 weeks of my travels, I think I might have done things a little differently.


At lunch time, the elephants ate huge piles of bamboo as we feasted on rice and vegetables. After lunch, sitting in a hammock observing the elephants wasn't enough for me, so I approached them get a closer look and take some photos.

I took a few photos of a baby elephant from a distance, and then took a few steps closer to one of the fully grown adults. To my surprise, the adult elephant stuck its trunk out towards me. With my guide's words in mind "don't touch elephants without a mahout", I considered the outstretched trunk a friendly gesture from the elephant, and reached out my open hand in return.


The elephant quickly wrapped its trunk around my wrist and pulled me down to the ground in one swift motion. At the mercy of this giant creature, all I could think was I'm being squished by an elephant right now, nothing feels broken, keep breathing. Mahouts were yelling, sounds around me were forming, and after about 10 seconds of my face in the dirt, the elephant let go and I ran away.

The mahouts asked me if I was okay, and I said I was. I felt so lucky that I hadn't broken any bones or gotten any injuries. Then I look down and realized I was bleeding.

Somehow between the elephant pulling me down and pushing on me with its trunk, I managed to nearly rip my ear off from behind. I had to leave the camp right then and go to the hospital to get stitches. Disappointing, really, since we were going to ride the elephants through the jungle and give them baths in the lake.

Arriving at the hospital covered in dust, dirt, and mud with a bleeding ear, the first question was "what happened?" followed by giggles when I started explaining, "I was with an elephant...". The staff at the hospital see lots of foreigners coming in with motorbike accidents, but maybe accidents with elephants are a little more rare.

I was told my wound was "too dirty" to be stitched right away in emergency, and that I would have to stay in hospital. While I was sitting there trying to digest it all, an employee of the sanctuary had a talk with me.

He told me "Elephants are just like people. They have personalities and fears. That elephant doesn't know you, doesn't know your smell. Please don't think you did something wrong. It's just a miscommunication. You can have a great time with elephants again after you heal. Don't think negatively about elephants, because it isn't your fault or the elephant's fault. You just misunderstood each other."

And he's right: the mahouts who train the elephants spend 1-2 years working with one elephant in order to develop the rapport and trust that is necessary for them to be comfortable around strangers.
I thanked him for his words. They almost made me cry in that little hospital bed.

After a long afternoon of waiting and bed swapping, I was taken into the operating room, and my wound was cleaned and sewn up with 13 stitches.


Spending a long night in the Thai hospital was hard with the icy cool sting of the antibiotic IV in the back of my hand.

In the morning, my doctor told me I could "maybe go" if the stitches were holding well. He deemed everything okay and told me to return every day for the next week before having the stitches removed.

"Where are you going? Bangkok?"

Over the next week, I had my ear checked in so many hospitals by so many doctors I can't even name them. The first memorable hospital visit was in Luang Prabang, where the nurse took out my stitches and proceded to pull a stone out of my ear, and calling the wound "very dirty". She told me I needed to go to a different hospital to check my ear. And so comes the hospital visit in the famous tubing city of Vang Vieng. When the nurse took off the bandage, she gasped, and asked me where I had this done. She deemed the Chiang Mai hospital "very bad", and told me my ear needed to be re-stitched right there and then. My heart sank, as I thought I was getting near the end of this travel nightmare.
With a re-stitched ear and a new sense of frustration, I was close to calling an end to my travels and simply flying home to Korea to get my ear checked out by a hospital there.

However, the traveler in me decided to stick it out, and I spent the next week traveling in Cambodia. I kept my ear dry and clean, and I was very cautious not to get it wet.

When I did finally get back to Korea, ten days after my second round of stitches, I went to the first clinic I came across to have the stitches removed. I went to a random clinic in the middle of Seoul, of which I knew nothing. When I came out of the elevator and went to open the door of the clinic, I found the most full circle crazy trick of the universe; just to top off the absolute madness that had been my elephant ear:


The Korean doctor was the first one not to gasp when he saw my ear. He asked me where I had had the stitches done and why they were so uneven, and then he took them out without much fuss. "Don't I need to keep it dry? Don't you need to bandage it?" He nonchalantly told me the new skin was forming underneath, and that I just needed to take it easy.

If only I could have told the elephant that.

Three weeks later, my sister called to tell me that 2 of her friends who had just returned from a trip to an elephant park in Thailand had heard a story of a Canadian girl who had gotten her ear ripped off by an elephant.

I guess all legends have their origins.

Watch the video I made from my Thai hospital bed.
Posted by expatkerri at 3:09 AM 0 comments